According to a new study conducted by MNP, the fifth largest Canadian accounting, taxation, and business consulting firm, the BSV blockchain is orders of magnitude more energy-efficient than BTC and BCH.

“BSV is more efficient due to block size and the number of transactions (throughput) currently available on the network and limitations of other protocols. So long as the size or number of transactions on the BSV network exceeds the limitation of the other protocols, BSV is the most efficient in this group,” the MNP study entitled “Blockchain technology and energy consumption: The quest for efficiency” stated.

The study comes after Bitcoin, the pioneer digital currency and the first-ever functional implementation of blockchain technology, has been lambasted for Bitcoin mining’s extremely high electricity consumption that burns fossil fuels, which then release harmful greenhouse gases into the environment.

the complicated mathematical problem in order to win the right to add a new block on the blockchain.

Solving this highly complex puzzle requires specialized equipment to expend a massive amount of computing power that results in the consumption of an extraordinary amount of electricity. To compound this already immense amount of electricity spent, a professional cooling system to keep the computers from overheating is also needed.

However, PoW is central to the concept of Bitcoin being decentralized, as well as in fostering competition within the ecosystem that will serve to drive the development of better and more efficient technology. It is something that cannot be replaced by something such as Proof-of-Stake (PoS).

“Proof-of-Stake has one sort of critical flaw in this argument, which is that it’s fundamentally broken and doesn’t work. The only way to actually make Proof-of-Stake start to work is to combine it with proof of work. It’s broken in the sense that—the key difference, I suppose, between proof of stake and proof of work is that miners actually have to continually outlay operational expenditure and put it at risk,” BSV Infrastructure Team Technical Director Steve Shadders explained during a previous CoinGeek Conference held in Zurich, Switzerland.

“Our model’s approach compares the consumption in kilowatt-hours (kWh) per block, kWh per transaction (tx), and kWh per megabyte (MB). The model must consider what is being produced per unit of energy with respect to energy consumption when comparing the different Bitcoin protocols,” the MNP report stated.

The true measure of Bitcoin energy efficiency is its throughput or the number of transactions per second (fps) as it essentially divides consumption into the energy cost per transaction.

“Transactions are the ultimate measure of throughput. The number and size of the transactions in a block will affect the size of the block. BTC has a strictly limited block size approaching 4MB. BCH has a much more permissive limit of 32MB. BSV is unbound by block size. Since mining is what consumes energy, and blocks are the product of mining: the more transactions in a block, the lower the energy consumption per transaction. Similarly, the larger a block can be (measured in megabytes), the lower the energy consumption per megabyte,” The MNP report explained. 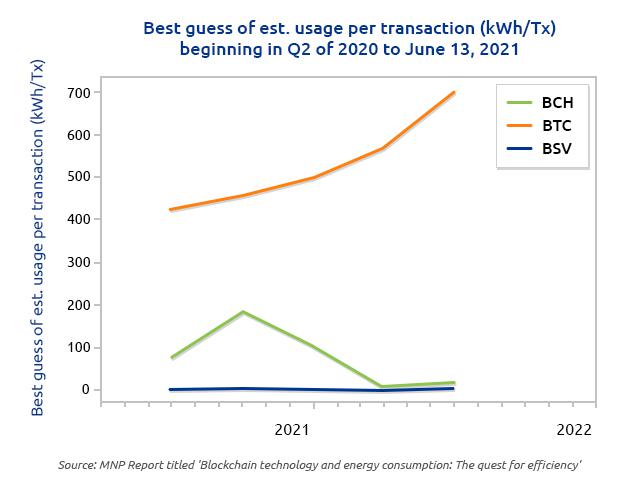 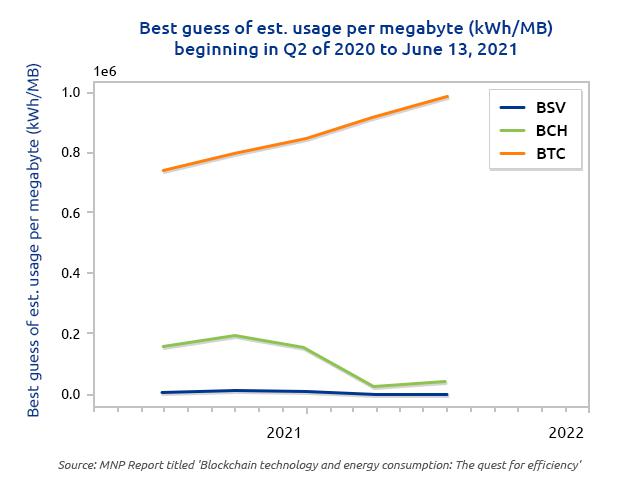 “Results indicate BTC consumes orders of magnitude more power than either of the other two protocols tested. The estimated consumption difference between the protocol with the most consumption (BTC) and the protocol with the least consumption (BSV) is at its most (16,041.24 GWh) in Q1 2021, and its least (11,343.25GWh) in Q2 2020 as per our model’s output. Our estimates indicate BTC consumes between 60 and 250 times the power of BSV per quarter.”

And this is all because BSV is capable of unbounded scaling, unlike BTC and BCH, which means that block size and throughput are continuously increased as the network scales. At present, 2GB blocks are already being mined on the BSV blockchain at throughput of more than 5,000 tps. And this will soon be increased to up to 100,000 tps when the Teranode update is released in the first quarter of 2022.

Now, as the block size and throughput continue to rise, the fee per transaction also constantly goes down. Already, BSV fees are at fractions of a halfpenny. These powerful capabilities allow the BSV blockchain to become a reliable, efficient, and cost-effective solution to the need of global enterprises to upgrade their systems and processes to something much better—blockchain-based applications and platforms that resolve chronic issues such as inefficiency, latency, expensive third parties and vulnerability to all sorts of criminal activities.

Not only can the BSV blockchain continually increase its throughput to lower energy costs per transaction, but it also offers businesses from across all types of industries to maximize profitability. Currently, there are already hundreds of applications being developed and are already fully functional on the BSV blockchain. The world is benefiting greatly from it, and this is what ultimately justifies its high energy consumption.

“There are actually huge benefits to using Bitcoin, and that’s what justifies the energy cost. No one argues that we shouldn’t burn energy to run a hospital because it’s obvious what the benefit of that is and it’s obvious what would happen if you try to run a hospital without energy input. Bitcoin provides utility in ways that we haven’t even imagined just yet,” Shadders aptly concluded.